I'm an Apple Watch user.  Not since day one but six months later when I got it as a gift from a friend for a favor I did for him and his family.  After a year of it, I was still not a believer.  Today, I am.  And I'm very optimistic that Apple will revolutionize personal health and the healthcare industry in general.

After using my original Apple Watch for a year, I lost interest in it mainly because it was slow, buggy, and, well, the battery life was really not that great.  I have had to cut workout monitoring short because the battery died and I ended up not being able to close the rings. 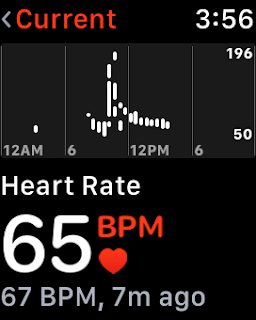 I eventually about a new Series 2 and that was much better.  It was this Apple Watch 2 that really had me believing that Apple has something there for me personally.  I gave it to my mom and I eventually graduated to a Series 3 this year after trying various ways of having the same health benefits with only my iPhone X.  I got a regular pedometer to monitor my steps when I don't have my iPhone on my person.  I also tried to revive my old Fitbit but after a year of sitting in my drawer, the battery died (probably of neglect).

None of those options offered the same benefits as having an Apple Watch.  So, I decided I need to go back to the Apple Watch.  With the latest Series 3, the longer battery life, which means it should safely last me through the day, I think Apple has a watch that is truly worth getting.  It's faster and the latest OS offers more features that is likely the first step towards letting users leave the iPhone at home.

It is important to recognize that Apple Watch wearers like the health benefits of heart monitoring and workout tracking.  It is also the health features that Apple advertises much of the time.  And the only health monitoring feature is the heart rate monitor.  I'm hoping there Apple will add more body monitors in the future.  However, for now, it appears that the heart rate monitor, which studies have shown it to be the most accurate, on the watch is good enough to save lives.

Here is a growing list of people who were saved by their Apple Watch.  A vast majority who were alerted by an expected elevated heart rate.


It is noted that a few of those folks in the list used third party apps designed to alert them of elevated heart rates, Apple Watch 4, the latest version, can do it natively.
Posted by Paul_onxo at 5:11 PM