Who here have not gotten started with a pedometer and than eventually graduating to a Fitbit or an Apple Watch to count the number of steps they’ve walked per day, probably with trying to hit the daily goal of 10,000 steps per day? And if you haven’t, you probably know someone who has a wearable device that counts the steps the wearer walks per day.  As an Apple Watch user, I would like to see Apple allow custom metrics in addition to the three circles many of us try to close on a daily basis.  And one of these metrics is the goal of hitting a specific number of active steps per day. 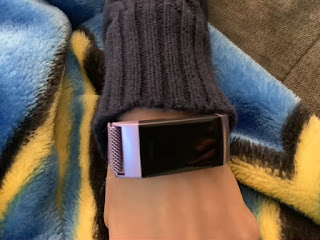 The calories ring means nothing to me.  Getting up 10 times a day is important to some folks who sit at a desk all day but for someone like me, who does sit at a desk all day, and I get up and move around 15 to 18 times a day, I rather have an alternative goal - instead of the standing metrics, I like Apple to give users an additional circle to close or to replace one of the circles with a set of other metrics. 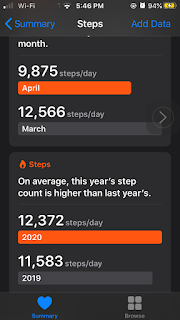 Maybe one of them can how many minutes of breathing you do (there is an app on the Apple Watch called Breath.  I find that to be a very useful app that I use through the day.  I rather have the steps goal as a metrics of my choice.
Now, believe me when I tell you that the steps metrics is practiced almost like a religion among us who practice and live by it.  Why 10,000 Steps?  Probably social media. Or before that, it was what people tell each other or was told by someone at a gym.  Even before that?  Well, I would like to believe that it came from a bonafide medial study but it probably didn’t.  No one knows for sure but it might have originated from a Japanese pedometer in the 1960s that figured 10,000 in Japanese sounds pretty awesome and has cultural meaning.
The adequate and minimum number of steps each person has to take varies.  It depends on the person, age, sex, diet, and the level of physical activity.  A friend has been doing 10K a day for more than 10 years.  Another friend practices months at a time, abandons it, and then picks it up again later and still came out to about 11K a day.  For me, as you can see from the screen shot I took from my phone, I averaged about 11.5K in 2019 and is almost 800 steps more a day in 2020 so far.  I found that I need to do an average of 12K a day to maintain or lose a pound here or there.
On a personal level, hitting that 12K or more a day is uplifting.  And seeing my average go up as a result means more to me than standing on a scale trying to see where I am.  So, that why I guess Apple Watch wearers really try to close those three rings.
If Apple wants to keep those three rings as they are now, fine.  But I would like to see an extra ring added for a customizable metrics.
What do you think?  I think this is more feasible to do in the short run with a better return than wishing for the Apple Watch to have a week long battery life.
Posted by Paul_onxo at 3:36 PM