iPhone 4: Why Glass For the Back? How About Multi-Touch From The Back One Day?

Many bloggers and reviewers are wondering why Apple chose to use glass for the back of the iPhone 4 instead of plastic or metal? After all, the iPhones of previous generations from the 2G to the 3GS were all doing fine with plastic backs.

I think there's more to it than just aesthetic. While hold the iPhone 4 this week during typing and gaming sessions, my fingers were absently gliding over the smooth glass back. My first thought was that the iPhone 4 was sturdy and the industrial look was a good change from the previous physical forms.
Then I noticed the difference in hold the other iPhones to the iPhone 4. With the iPhone 4, my fingers at the bottom of the iPhone 4 felt like they were using the multi-touch screen. I didn't get that feel from the other iPhones. It was then I realized that Apple had more than one reasons to use glass and it was for more than conformity or looks.

Apple is prepping for the next iPhone version or the one after that when multi-touch access to the iPhone can be done from the back of the iOS device as well as the front. The idea came to me when I was playing a fast pace arcade game. I could have easily control my ship from the back of the iPhone with my fingers as from the front. The advantage to that is there would be more real estate on the front for viewing.

This would also explain why the last few years, Apple has insisted on no buttons even when gamers complain about having parts of the screen obscured by controls and the thumbs.

And what of typing? It'll work just as well if not better. Just imagine holding your iPhone and trying to type from the back with your index fingers. What Apple is likely to do is allow users full access to the screen and layer a transparent keyboard on top of the text as you type.

And for scrolling and pinching, full access can be done from the back. And if it doesn't fancy you, use the iPhone as you already do now.

Of course, this is all conjecture on my part but I think Apple has a patent or two that allows just the type of input and multi-touch that I'm talking about here. And if I'm writing, when will we see this? iPhone 5.

The pace if innovation is moving very quickly. Without Google and Android pushing Apple's buttons (those devices do have more buttons, don't they), Apple isn't likely to accelerate iPhone development like they've had.

If I'm writing, this will impact the iPod Touch to some extent as well. I'm more certain of a form change for next year than this year. But right now, iPhone 4 users are Apple's beta testers for the new iPhone 4 design as it is with the glass back. Apple is probably interested in how users handle the iPhone 4. They're probably looking closely at how the damage to the back glass is going to be like as well.

So what do you think? Would you want a new way to access to the iPhone from the back? I know this much. This will open the door to even greater possibilities for users as well as ingenious developers.
Posted by Paul_onxo at 3:05 PM 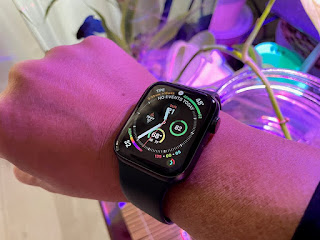