After dinner, I finally got an opportunity to play around with the brand new Mac app store that appeared magically on Intel Macs all over the land, provided you upgraded your OS to 10.6.6. Once that little business has been taken care of, you'll notice a small icon that appeared on the left-hand side of the dock.

So, good is this app store for? And who does it benefit? And will this translate into something that will be as successful as the iOS app store?

We shall see in time but for now, let's take a look at features are available and how this benefits the user. 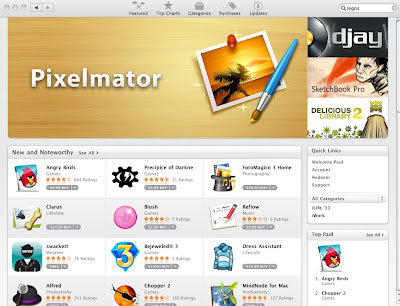 Clicking on it, I was met with a new application that is Apple's new way of getting you buy its products. Just like the iOS app store that is intended to not just help developers strike it rich but also to help Apple sell iPhones, iPads, and iPod touches, the new Mac app store is designed first and foremost to help Apple sell Macs.

From a totally mobile perspective, On Apple being more about mobile in general, it will work well for anyone using a Macbooks. iMac and Mac Pro users too. You're not left out. 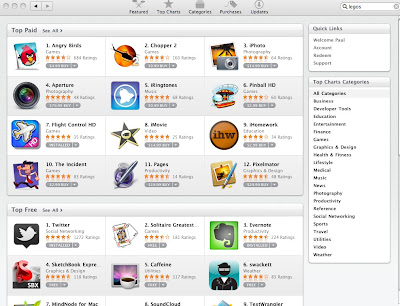 Once you open up the app store, you are met with something you've seen before if you're familiar with iTunes. You see a feature page of all the apps that the curators at Apple think you'll like to buy. At the top, you'll that you can select to see what the top apps are in "Top Charts", browse "Categories", see what you've bought from "Purchases", and finally what updates you might have available. 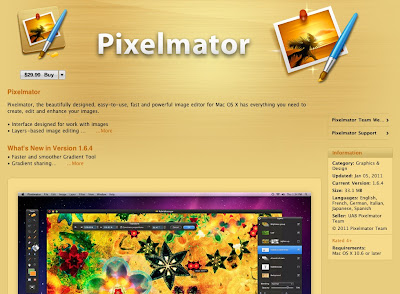 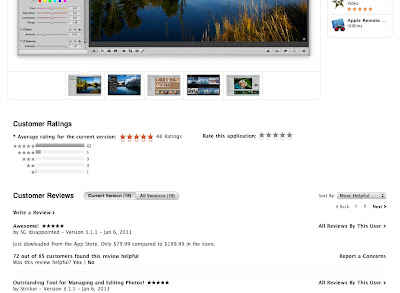 Right now, there are virtually no updates since it's been less than 24 hours since the store opened. So after browsing around and taking a look, I decided I should download an app or two. Or four to be exact.

The first app I downloaded is Flight Control HD. For any iOS user, you probably have heard of it. I went with this purchase because I was curious how a touch-based game translate into a touchpad or mouse-based control. It was intuitive and will take some fast reflex. But it is as you expect if you were playing on the iPad or iPod touch, which I prefer. 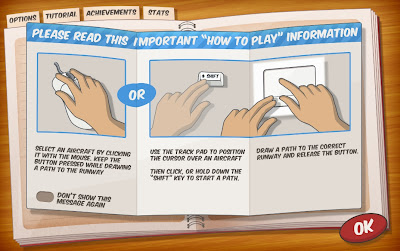 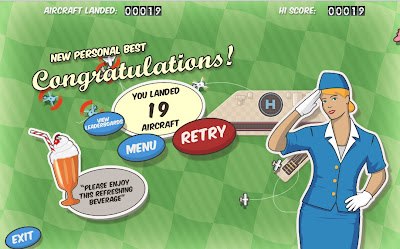 The next app is the Twitter. Flight Control HD cost me $4.99 and Twitter is free. No brainer. 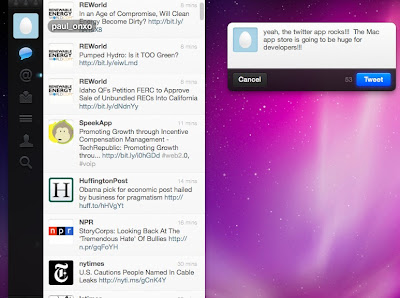 The next app I bought is a game called Gratuitous Space Battles. Awesome looking from the graphics and the reviews of the game were excellent. I decided to get the $15.99 game. This happens to be the most expensive game that I have bought, even compared to those on the iOS. The most expensive iOS game I've purchased was $9.99.

Having spend some time with it, I got pretty excited about the whole app store experience on the Mac. Let me just say that I am not a developer. But if I were, I would be very excited about the prospect of having such a venue to expose users to my apps.

First, as consumer, having such a convenient store front to look for apps that I need is really something that I have not seen before. The closest thing that I can think of that provides a similar experience is the Steam Store for games.

Now, I can just type in what I am looking for into the search box and find what I might be looking for. And over time, the current library of one thousand apps will grow many times over. And this explosion in explosion will mean choices and competition among developers for our money. And competition is a great thing in a free market society.

As a developer, don't fret. Even if you're used to selling your apps and keeping more than 70% of the proceeds (Apple is asking for 30% of all sales), this is not a bad thing. Why?

Well, today, you just gained about thirty to fifty million potential customers who earlier in the morning before the Mac app store came online, knew nothing about you or your apps. And with fifty percent of all new Mac sales going to new Mac users, you are easily gaining anywhere from eight to ten million new users each year.

And this is just the beginning. This is the Mac app store version 1.0. I reckon that Apple started learning about the whole experience right at the start of the first purhcase and download. Over time, Apple will continue to improve and evolve the store to help customers and developers to connect.

Obviously, no one knows for sure if the Mac app store will have the kind of success the iOS app store has been for iOS developers but the translation has been identical and I'm very optimistic.

And who is this store really for? I've already identified the benefits to users like myself and developers. More importantly, Apple would benefit greatly because a rich software ecosystem may also mean Apple selling more Macs over time. And ultimately, that is what its all about for Apple as a business.

I've painted a pretty rosy picture. And no doubt, there will be hiccups and stumbles along the way. Already, there are talks about the DRM being broken and complains that some apps are allowed in the store while others aren't. I think all that will be worked out over time in the marketplace and, hopefully, with Apple learning from the experience by heeding its customers and the developers whose apps populate the app store.

I'll be back in a couple of days to update anything new on the Mac app store. Trust me, there will be updates on this matter.

One more thing, look for Microsoft and many others from Dell to HTC to Google to announcement their own app store to compete with Apple.
Posted by Paul_onxo at 10:27 PM