My Impression of the Macbook Pro With Retina Display


My iPhone 4 died yesterday so I went to the Apple store hoping that they would replace it with an iPhone 4S as I’ve heard from various online reports.  Unfortunately, that didn’t happen.  There was some kind of part that the Apple genius replaced quickly within a couple of minutes and I was sent on my way.  However, I did not leave without getting a good look at the new Retina Display Macbook Pro. 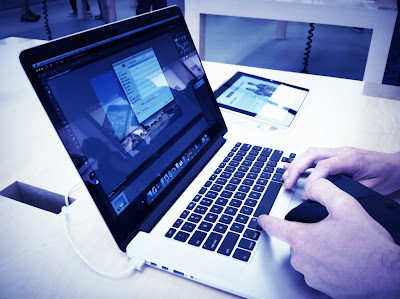 On so many levels, the RDMBP is the perfect laptop for a majority of the mobile market.  From a design perspectively, Apple said this was the best Macbook they’ve designed.  I think they did a great job with the Macbook Air, particularly, my 11” Air so it was kind of hard to top but I think many fans will at the very least agree it’s on par with anything Apple has come out with.  The thinness of the RDMBP was apparent sitting next to a regular Macbook Pro.  And the lid with the screen was sickly thin (but in a good way).

I lifted the RBMBP a bit to gauge how hefty it felt.  It was sturdy to say the last at 4.6 lbs.  Definitely not a backbreaker and lighter than the older design MBP.  Because it look and feel bigger due to the 15” screen, my mind quickly played a trick on me into thinking it was heavier than the 13” MBP.  However, the 13” MBP weighs in at 4.5 lbs but the RDMBP weighs in a 4.46 lbs.

As for performance, there was a giant Scot who was looking at the RDMBP with me.  I bet he played rugby.  Anyway, apparently, he was a developer looking to upgrade from the same model 11” Air.  (To him, he thought it felt heavy.  But we quickly reminded ourselves that we were coming from the perspective of a 11” laptop.).  He found the performance to be satisfactory while the SSD was not as quickly as he said Apple promised.  Still, it was faster than the SSD in the Air.

Then he went into the preference and started playing with Apple’s display settings.  We went from the optimal Retina Display option to one that gave us more desktop real estate.  We used Adobe’s apps, Word and Excel, and Safari.  Bascially, we were looking for apps that were not yet optimized for the Retina Display.  Maybe we weren’t too discerning but the text and everything was absolutely gorgeous. 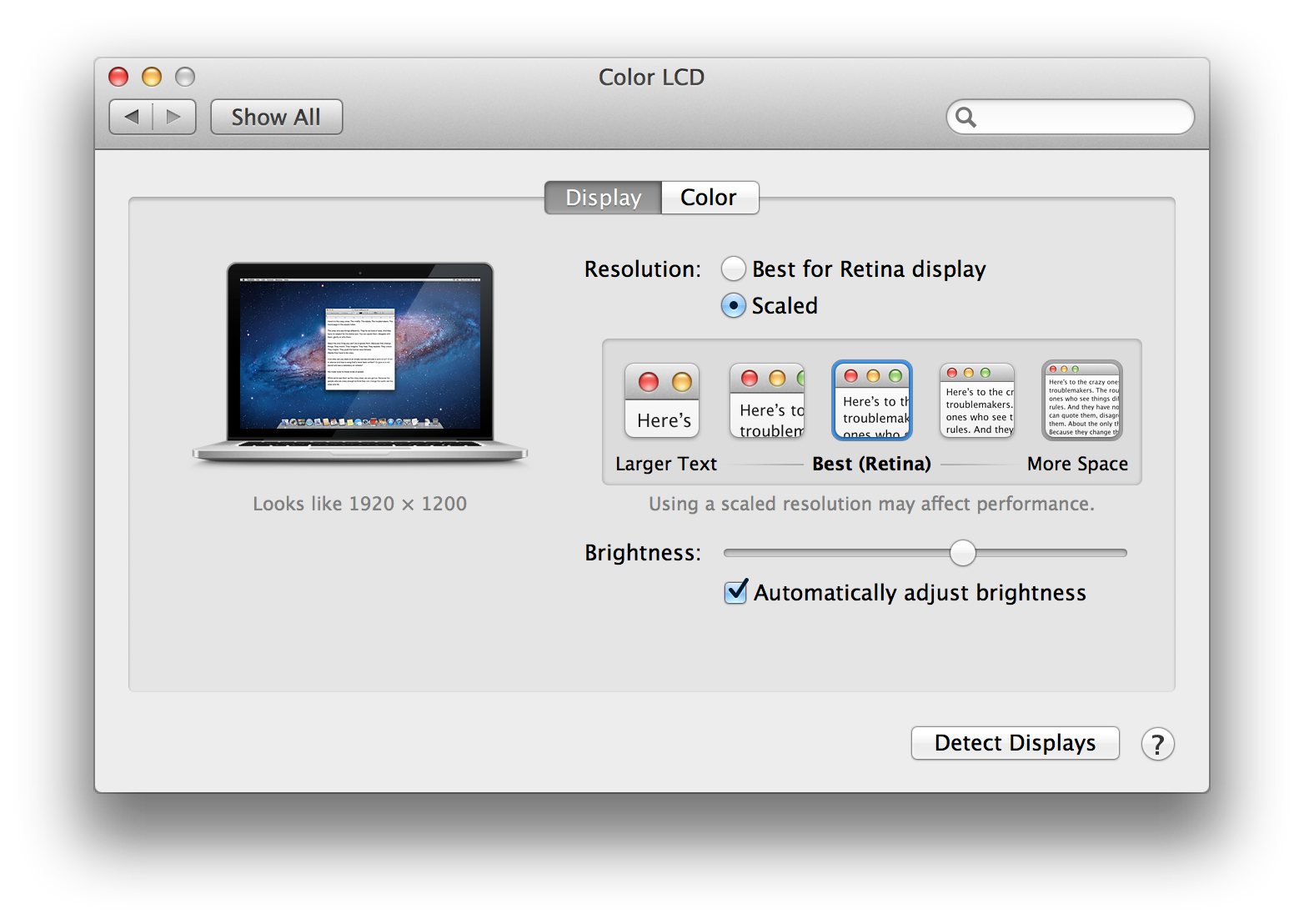 As zoomed in and out of websites and adjusted the resolutions and you got rendering quality as far as text goes that you’ll see on your iPhone 4 and 4S or the new iPad.

At the end of the day, I concluded the 11” Air that I have could sill carry me through another year.  And maybe in that time, Apple will update the Airs with their own Retina Display.  The giant Scot developer agreed but he was also interested in seeing what speed improvement Apple made to the newer Airs.  I had to go so I didn’t get to know what he found out.

The RDMBP does carry a small premium but it is well worth it.  The Macbook Pro with Retina Display is statement to the rest of the PC market, try to follow us and copy this if you dare.  Apple found a way to make it lighter and incorporate new hardware features without compromising performance.

Anyone looking for a Macbook Pro should definitely get the RDMBP.  If you don’t, you’ll be kicking yourself later on.  As for current Air folks, we can only hope that Apple will bring Retina Display in a year or so.

Make no mistake.  Even as Apple tries to move the consumer market towards the post-PC era dominated by its iPad, it has not neglected the “trucks”.  If anything, the new Macbook Pro with Retina Display serves as a model for where Apple wants trucks to go and is daring everyone else to follow.

Anandtech has done a great review/analysis of the Retina Display.  I recommend a read.

I have a macbook and a flip but it doesn't allow editing. I need a camcorder I can edit on my macbook. What would be the best camcorder to use with my macbook?
macbook repairs