I love my iPod touch and do so millions of touch fans.  So, there is no reason to think that Apple will abandon it in favor of the iPhone and/or the iPad mini that is supposed to have about an eight inch screen.  Here's why:  millions upon millions of users opt for it who either don't want to buy the iPhone or cannot afford it and Apple needs it more than ever to fight the mobile market war and the coming living war. 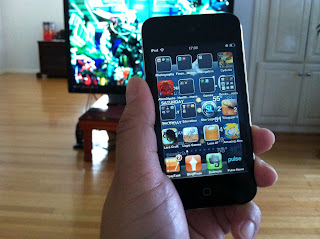 I started thinking about this long before I read this iMore post about it.  I guess now is as good as any other time to consider it.  And the iMore post made many points with the writer concluding that the iPod touch will in deed stick around.

For those reasons, I think not only will the iPod touch be around for a long, long time and likely won't go anywhere, it probably will continue to occupy the $200 price point, even experience a slight price drop while the iPad mini will likely start around $250.  There, no $200 iPad mini, at least not this year to start.  Maybe in 2013 if Apple follows its iPhone and iPad practice and drop the price of the previous year model.

As for the iPod touch, I love mine.  It's been with me almost as much as the iPhone has been.  And it's decent battery life give me an additional life line that the iPhone along cannot.  I end up using both in tandem - this was made easier with iCloud especially when I work with apps with iCloud support.

One other consideration also in support of the likelihood of Apple keeping the touch around is it can serve as a low cost remote for Apple's television aspirations.  Right now, I use the touch as a remote for the Apple TV when I cannot find the remote or when I want better control over media apps in Apple TV.

With a growing Apple TV market and quite possibly more functions and apps with each upgrade, Apple may require and iOS enabled device like the iPod touch to control them.  Right now, the remote app for iOS is very basic.

On top of that, I also believe the iPod touch will be upgraded this year if only for this one reason alone:  Airplay.  The current iPod touch only supports Airplay in limited Apple specific apps.  Third party apps with Airplay support only works on the iPhone 4S, iPad 2, and the 2012 iPad (certain newer model Macs with Mountain Lion will also support Airplay mirroring - the potential of this will be left for another post on another day).

It makes sense that Apple will modernize its iPod line to support Airplay.  The iPod touch with an upgraded A5 chip or better from the current A4 chip should do the trick.  On top of that, I'll go even a step further and say that future iPod nano updates may also gain Airplay support as well.

I'll conclude the post by bottom-lining this:  before the iPad, it was just the iPhone and the iPod touch as the sole iOS devices.  The iPod touch expanded the iOS ecosystem beyond what the iPhone could do on its own.  The touch spread Apple's influence into the schools, hospitals, gyms, and even enterprises.

The touch also helped decimated incumbent competitors, Nintendo and Sony, in the portable gaming market and gave notice to game developers that Apple was for real this time around.

The mobile war isn't over yet.  Apple still needs the iPod touch at its $200 price point, maybe could be lower, to fight its war against Android and a potentially revitalized Microsoft.
Posted by Paul_onxo at 5:37 PM