iPad mini: Who's Idea Was It? Steve Jobs or Tim Cook?

The iPad mini will be a year old soon and be replaced with an upgrade by Apple this fall.  What I want to explore here is whether the decision to rlease mini, obviously having been in the works of years even when Steve Jobs was alive and at Apple, planned all along or Tim Cook's after he become CEO. 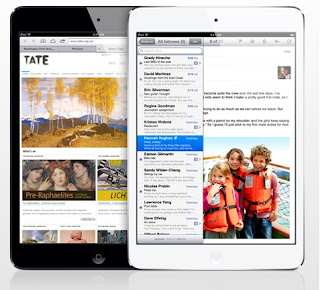 I've got a 2013 Nexus 7 that has fit nicely into my daily workflow.  The battery is subpar given what Google advertised but it's still good enough where I can get through the day safely without running out of juice.

Having said that, the Nexus 7 is a pleasant surprise.  I can live on the Nexus, if I had not been exposed to the iPad.

That is not to say that I won't be getting a new iPad this fall.  The reason is because as good as the Nexus is, the Android tablet experience leaves one with much to desire because of the lack of a true tablet experience I'm used to with the iPad.

Still, that's not the issue here.  The issue is the iPad mini.  Steve Jobs had blasted 7" tablets as too small to use and the media bought his argument for the most part.  But the consumers did.  And 7" tablets, much cheaper than the iPad, became an issue for Apple.

So, let me throw this out there.  When Apple released the iPad mini last year, was it planned all along with Steve Jobs' blessing?  Or was it Tim Cook's own after he saw where the market was headed in terms of screen sizes and prices and decided to rush it out?

My theory?  The 7.85" iPad mini was in the works for years along with a host of other screen sizes.  But priority was given to the iPad since it was the flagship device and growing at a fast click while cannibalizing PC sales.

But with the rise of 7" Android tablets price in the $200s, Apple was compelled to respond.  First with the $399 iPad 2 to buy time until it could release the mini last year.

And to some, the iPad mini was full of compromises which leads me to conclude that the iPad mini is Tim's product, not Steve's.  First, no Retina Display.  Second, it was using an older iPad 2 system.  And lastly, the battery life was not up to the usual iPad standard.  All that together, the 2012 iPad mini felt compromised.

That isn't to say that its a bad product.  It just isn't the iPad mini with Retina Display and 10+ hours of battery life that we were expecting.  But it did its job.  It opened up the tablet market to more Apple tablets and to a wider range of consumers.