Weekend With Just the Apple Watch: It Is My Smart Feature Phone And Mostly Happy With It

My last feature phone was a Sony flip phone.  It was light and had decent Internet features for 3G connectivity and even lets me add books via text files so I did actually read a couple of classics on the go.  But it could not do was a lot of what my Apple Watch with cellular connection can do like iMessages, monitor my sleep/health/workouts, and listen to podcasts/music. In a way, I think Apple has created a perfect smart feature phone that just sits on the wrist. 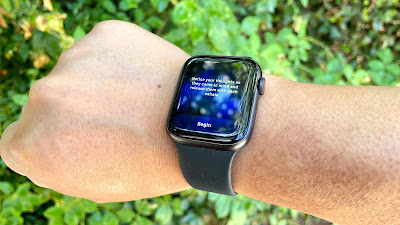 My epiphany of Apple Watch is a smart feature phone just so happened over the weekend when I left my iPhone at work and I did not want to go back to the office. After all, I do have my iPad mini when I needed to play games, writing, and some some work.  Oh, and I have my MacBook as well.  When I went out this weekend, it was only me and my watch.

This is how the Apple Watch came in handy:

The watch performed as expected - speed, the functions I performed on it was flawless, and the battery life was adequate for what I was doing.  In terms of battery life, I charged it after my workout while having breakfast and by the time I left my home, it was nearly at full charge.  By the time I got home, it varied - 50% on Saturday and about 40% on Sunday.

I do have one major gripe during my weekend with the just the watch.  While I was trying to update the WatchOS, I was unable to proceed after it appears that the update has been downloaded onto my watch because I was required to go to my iPhone to view and accept to the terms from Apple. 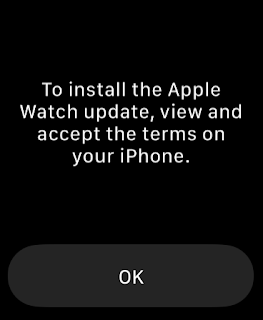 First of all, I don't read the terms at all.  This is Apple.  It's a corporation and we all know when it comes to terms and agreements, it's stacked against the consumers, which means the terms simply says that Apple owns me and if I don't accept, my Apple devices will all just self-destruct, figuratively.  So, I agree and I would have agreed without reading the whole agreement if the Apple Watch had an option for me to just sign my life away with an "ACCEPT" option.

As you can see, Apple still requires that we go to our iPhone for such things.  I think we are coming to a time when we will see additional decoupling of the Apple Watch from the iPhone and, hopefully, we can use the Apple Watch without the iPhone as a crutch.  I am sure in the near term, this is Apple's way of making sure we stay in the Apple ecosystem as much as possible.  It also means that Apple is working through each issue that we may not be aware of until the Watch can working independently of the iPhone. I think it is why the Apple Watch cannot be activated and used through a Mac or iPad.  It is not that it is technically impossible.  It is just that why bother letting users use their Apple Watches through the Mac or iPad when eventually it will be able to be activated and used independently of the iPhone as well.  That is just my thinking.

Still, Apple, I like to just be able to upgrade the OS without having to return to the iPhone to do that.

Over all, I feel very liberated. I did not feel any anxiety - I did feel something was amiss at times as my hand instinctive felt my left front pocket of my jeans where my iPhone usually is. and instead of burying myself in the iPhone, I'm paying attention to what is going on around me - good ways and of course watching where I am going. By Sunday, I felt like I can really just leave my iPhone at home longer if I wanted to.