I want Apple to give me Stage Manager on the iPhone when I connect it to a TV/monitor via Airplay or cable. I know that Apple probably will never go this route because I would love it if Apple makes the iPhone the everything device for us mobile users - including individuals and companies as well.

To do this it'll take something former Apple VP Phill Schiller said, "courage". When he famously said the word "courage" in front of a crowd for the iPhone 7 unveiling when Apple "courageously" removed the headphone jack.

Now, it is time for Apple to be courageous again - the low hanging branches of mobile features for Apple is slowly harder and harder to come by. We can expect better camera year after year but other than that, what revolutionary features can we expect. In the past, I have written about health features that Apple can add to the iPhone, turning it into a medical tricorder if both doctors Leonard McCoy and Beverly Crush would approve of. That's another post that I will eventually visit again.

One feature that Apple can bring to the iPhone that will provide a greater impetus for users to upgrade their iPhone in a regular basis is to bring Stage Manager to a sufficiently powerful enough iPhone. 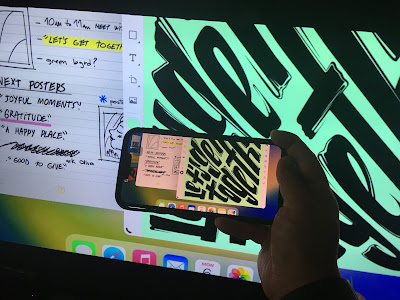 In the age of "quiet quitting" and "lying flat" in China, maybe you think that users would not want to take their iPhone back home to plug into a monitor or TV to start working again. I'm not talking about those folks. In fact, I'm a fan of quiet quitting. As an employee, I'll do my best in the time that I have at work. But paying me for forty hours of work and trying to get my to work sixty to eighty hours a week just is not right. As am employer (which I am not), I would not expect people who work for me to put in more time than what I pay them. It just is not fair. But this too is another blog post entirely.

I'm talking about people like me who use their iPhones for social connection and recreation but someone who create contents on it as well. Imagine an iPhone with M3 chip that allows me to not only crush my opponents in RPG games or watching videos on Apple TV but also lets me connect to a monitor that turns the iPhone into a computer that lets me use desktop class apps with Stage Manager implementation. I add a Bluetooth keyboard and mouse and I'm off to the races - writing, drawing, or churning out videos for Youtube.

Of course, you're thinking why would Apple do this - wouldn't this cannibalize iPads and perhaps even Mac sales? Perhaps. But if the Stage Manager enabled iPhone is only available for the iPhone Pro Max, it would tip iPhone sales towards the high end - generating more revenues and profits. Most content creators and professionals would still opt for the Mac. There is no question about that.

Some iPad sales might be cannibalized by an iPhone Pro Max but iPad users who want the bigger screens on the go, including myself, would still get an iPad. As the years go by and Stage Manager improves, the line between iPad Pro and the Mac will blur even further - cannibalization between the two classes of Apple products is inevitable. With a Stage Manger enabled iPhone, Apple is simply adding another premium product to the mix.

I know this is probably too soon for it to happen because Stage Manager is so early in its development and there are a lot of new features, bugs, quirks, and input from users in the coming upgrades for Apple to add, fix, and think about in general. Even once Apple get to a point where it is satisfied with Stage Manager implementation, it should naturally come to the high end iPhones.

Breaking down the iPhone to its most essential element - it is a computer. Steve Jobs said computers are like the bicycle for the mind. Think of Stage Manager on the iPhone as the next natural step in the evolution of that bike - a motorized bike that takes mobile computing and creative endeavors to the next level.